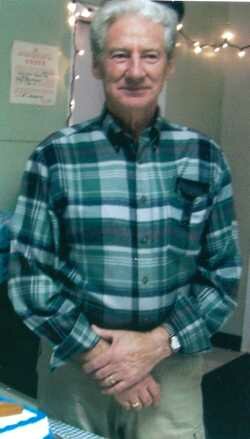 Please share a memory of James (Jim) to include in a keepsake book for family and friends.
View Tribute Book

It is with great sadness the family of James (Jim) Wesley Harding of Burin Bay Arm announce his passing on August 4th, 2022 at the Burin Peninsula Health Care Center at the age of 80 years.

Predeceased by his mother Susie; father Samuel and brothers Wallace and Albert.

Jim was a full of life with an with an outgoing personality. His smile and laughter always attracted many. He was a man of wit and you never knew what he would say but you can be sure it was what was on his mind.  He was always ready for a good yarn and his mischievous side looking for a prank to pull.

Jim was born on November 16, 1941 in Burin Bay Arm in his family homestead. He married Carolyn on October 5, 1963 in Halifax, Nova Scotia.

Jim loved the outdoors, especially going in the 'woods'.  He would jump from the supper table to lend a hand to anyone in need. We could always count on him for advice when you needed it, even if you didn't you would get it anyways.  He loved his music, Price is Right and the evening news, he may have slept through it all but it had to on.  He loved to go to the "Colony Trust" and listen to music with his friends which kept his heart warm with dance.  He's dancing with the Angels now and laughing with his friends. We will always have our memories and he will be sadly missed and remembered by all.

In keeping with Jim's wishes cremation will take place.

Family will be accepting visitors on Monday, August 8th from 2-4PM and 7-9PM at Serenity Funeral Home, Burin.

Funeral Service to take place from Bethany United Church, Tuesday, August 9th from 11AM open to everyone.

Donations in his memory may be made to Bethany Cemetery or Janeway Hospital.

James Wesley Harding is the seventh generation of John Harding of Timsbury, Somerset, England.  James is the son of Samuel John and Susie Belle Harding, born on November 16, 1941.

He started working at the age of 14 (1955) in the packing room at the Fishery Products in Burin.1958 went on dragger to take his father’s place on the Zebride as a deckhand.1959 – went on the Swivel as a deckhand for one month, he was switched to a stewart for six months.   17 years old cook on the “Zibora” James made five trips on the Zibora as a cook.September 1960 had a car accident driving home at midnight with friends.

Spring 1961 went to Nova Scotia on the Zebride with his brother Howard as the boat was going to get a propeller “blade” changed.  He worked as a deckhand on the way to Nova Scotia to pay his way.  This trip took three to four days the whole time he was sea sick.  When he arrived in Nova Scotia he applied at the 40 Fatham Division of National Sea and got on job on the Cape Charles that sailed at 6:00 p.m. that same evening.  He finally got over his sea sickness.During his time in Nova Scotia he also sailed on the Halfish, Calm, Surge and Halhawk.James met Carolyn Joan Weatherby in May of 1962; he escorted her to her prom for her grade 11 graduation.  Carolyn had a surprise party for his 21st birthday November 1962; during this time he was working on the draggers on the Cape Charles.

June 1963 James returned to Newfoundland for a holiday and worked at the Fish Plant in Burin.At The end of August 1963 he returned to Nova Scotia to work in the fish plant until the week before Christmas when he went on the Surge with Ray Mitchell as the captain, returning home Christmas eve.He attended trades school for barbering in 1964 and worked two years barbering to serve his apprenticeship.  He worked at Bill Grady’s in Bedford for one year until he had an argument over hair styling.

James and Carolyn Joan Weatherby were married in October 5, 1963 where they lived in Bedford, Nova Scotia.He worked with Cecil Hatt of the Eatons Shopping Centre in Halifax barbering until September of 1965.  June 1966 for a holiday to Burin Bay Arm, Newfoundland while there decided to relocate.

He returned to Halifax two days after Roy , his youngest brother was married on August 24, 1966,Jim and family relocated to Burin Bay Arm in 1966.  They bought what use to be Susie Belle’s store for $350; the land was given to him from Samuel.  He moved the house back from the road and renovated.

In 1977 they remodeled the house again to add the kitchen 18” by 26”; in 1999 they added siding, new windows and shingles.1967 he went back on the draggers as a cook sailing out of Catalina and Burin until 1970.He went to Vocational School October 1970 – June 1971 for Engineer and sailed on the draggers to get sea time where he was able to write a couple of certificates to obtain his engineer’s certificate.  He received his third class ticket in May 21, 1974.

He retired from the Sygnus in July1995 after 19 years with the Fisheries and Oceans.

Share Your Memory of
James (Jim)
Upload Your Memory View All Memories
Be the first to upload a memory!
Share A Memory
Plant a Tree