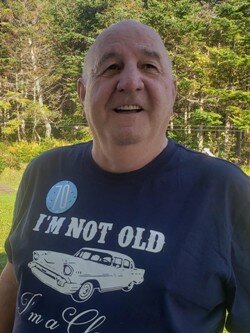 Please share a memory of Michael to include in a keepsake book for family and friends.
View Tribute Book

It is with great sadness the family of Michael Patrick Lundrigan announces his peaceful passing at the Burin Peninsula Health Care Center on December 30, 2022, at the age of 70 years.

Michael married Ruth, the love of his life in 1982. They had two daughters and 7 grandkids that were his everything. Mike loved the outdoors, hunting & fishing in the earlier years. He loved playing guitar, darts & spending time with the family. He started his career on the fishing trawlers, going on to carpentry work & finishing his career in Alberta as a scaffolder. Mike had a heart of gold, always around to lend a helping hand. At times he could be quite the jokester; you never knew what he was up too. Being the big brother to a large family his siblings looked up to him. He will be forever missed and loved by all of his family & friends.

Family will be accepting visitors at Serenity Funeral Home in Burin on a Monday January 2nd, 2023 from  2-6PM & 7-9PM.

Inurnment is at St. Patrick's Parish Columbarium on Tuesday, January 3, 2022 at 11AM.

In keeping with Michael’s wishes cremation has taken place.

Donations in his memory can be made to the Autism Society.

Funeral arrangements entrusted to Serenity Funeral Home. We listen, we learn, we walk with you.

To plant a beautiful memorial tree in memory of Michael Lundrigan, please visit our Tree Store

Look inside to read what others have shared
Family and friends are coming together online to create a special keepsake. Every memory left on the online obituary will be automatically included in this book.
View Tribute Book
Services for Michael Lundrigan
There are no events scheduled. You can still show your support by planting a tree in memory of Michael Lundrigan.
Plant a tree in memory of Michael
Share A Memory
Plant a Tree