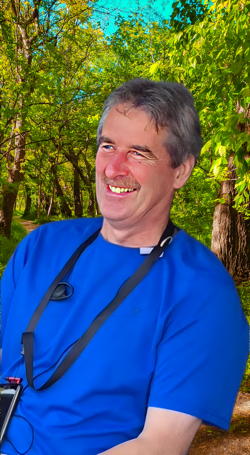 Please share a memory of Walter to include in a keepsake book for family and friends.
View Tribute Book

Passed peacefully away with his family by his side at Blue Crest Nursing Home, on Tuesday, December 6, 2022, Walter Pierce Patten of Grand Bank at the age of 66 years.

Walt was born and raised in Fortune as the youngest son of Frank and Jessie Patten. He had one brother, Keith. Walt was very active in hockey, soccer and enjoyed spending time with his family and friends. In 1982, he married the love of his life and his best friend, Charlene. Together they raised two children, Chad and Michelle. Later they were blessed with grandchildren; Kyle, Cameron, Lilah and Ethan. Walt lived for his family. He was truly the meaning of a hard working family man. He worked hard his entire life and spent many Saturdays in the woods to make sure he had enough wood to keep his family warm for the winter. No one ever woke up in the mornings to find him still in bed, he was either at work, in the country getting wood or doing something around the house. The love he had for his wife and family was like no other and he honoured his wedding vows word for word from beginning to end.

January 2022 our world would change forever when he was diagnosed with Pancreatic Cancer. He said from the start that he wasn’t giving up hope, and was going to fight as long as he possibly could to stay with his family. He wasn’t worried about his pain and suffering and he never complained once. Up until the second he took his last breath, his only concern was the void that his death would leave on his family. There are many words to describe this wonderful man; selfless, loving, hard working, devoted, gentleman, would just be a few. The beautiful memories we have of him will live with us forever in the legacy that he leaves behind with his children and grandchildren. We will always be grateful that we were lucky enough to have had him, even though his time here wasn’t long enough. In his 66 years on this earth, he would never rest until the ones he loved were taken care of, but now his time has come to get some well deserved rest. We will miss him beyond measure and love him endlessly, forever.

In keeping with Walter’s wishes cremation has taken place.

Special thanks to the Chemotherapy unit Burin Peninsula Health Care Centre, Community Health Nurse Tammy Stone & the employees of Blue Crest Nursing Home for their exceptional care and support they provided to the family through those difficult days.

In lieu of flower donations can be given to the Janeway NICU in memory of granddaughter Rosa Grandy.

Funeral arrangements entrusted to Serenity Funeral Home, Grand Bank We Listen, We Learn, We Walk With You.

To plant a beautiful memorial tree in memory of Walter Patten, please visit our Tree Store

Look inside to read what others have shared
Family and friends are coming together online to create a special keepsake. Every memory left on the online obituary will be automatically included in this book.
View Tribute Book
Services for Walter Patten
There are no events scheduled. You can still show your support by planting a tree in memory of Walter Patten.
Plant a tree in memory of Walter
Share A Memory
Plant a Tree