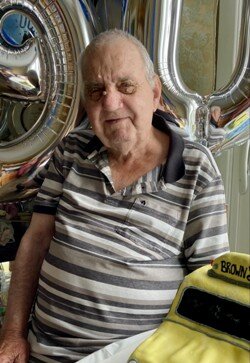 Please share a memory of Wilbert to include in a keepsake book for family and friends.
View Tribute Book

At the age of seventeen he moved to Fogo to work at the bank and he was always proud that he owned the 1st motorcycle on Fogo Island, a Royal Enfield.  As he told the story, the old timers in the community reported to the only RCMP officer in Fogo that there was a one eyed devil spitting fire terrorizing the Island at night. Jim worked all day so only got to drive the bike at night. The RCMP officer having found out that Jim did indeed receive his motorcycle, had him bring it to the wharf to show the old timers that the 1 eyed devil spitting fire was in fact, just his motorcycle. He told this story to anyone who would listen!
Jim later moved to Port aux Basque, still working with the bank and he and a good friend started taxi driving on the side for extra cash. Between them they had four cars and would drive back and forth across the island to St. John’s on the old dirt roads.
In 1951 he moved back to Grand Bank with one single vehicle & he carried on with this job until he retired in 1998. He covered  many parts of Newfoundland & met so many people during this time, it was a job he thoroughly enjoyed!

He had an amazing memory and could tell you about a restaurant he visited 50 years ago, where it was located, what he had to eat & who was with him! He remembered details in an unbelievable way!

Having family and friends around was very special to him and he loved a good party at the shed or a game of cards in L’anse au Loup. He also loved sitting in his big comfy chair with remote in his hand, heat on his feet as he polished off a good book or watched an episode of Coronation Street!

To honour Jim’s wishes, cremation has taken place & there will be no visitation. A service will be held at a later date.

Donations in his memory can be made to the SPCA.

Funeral arrangements are under the dignified and compassionate care of Serenity Funeral Home, Grand Bank, NL

To plant a beautiful memorial tree in memory of Wilbert Brown, please visit our Tree Store

Look inside to read what others have shared
Family and friends are coming together online to create a special keepsake. Every memory left on the online obituary will be automatically included in this book.
View Tribute Book
Services for Wilbert Brown
There are no events scheduled. You can still show your support by planting a tree in memory of Wilbert Brown.
Plant a tree in memory of Wilbert

Share Your Memory of
Wilbert
Upload Your Memory View All Memories
Be the first to upload a memory!
Share A Memory
Plant a Tree