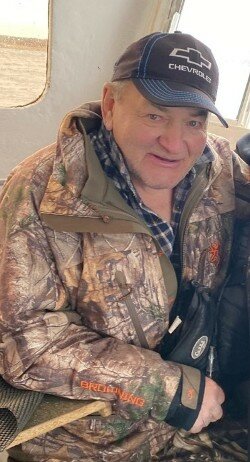 Please share a memory of Ernest to include in a keepsake book for family and friends.
View Tribute Book

It is with great sadness the family of Ernest Grandy of Garnish, NL announce his passing on January 31, 2022 at the Burin Peninsula Health Care Center at the age of 74 years.

In keeping with Ernest's wishes cremation has taken place.

The Story of my Garnish Grandfather, The Fisherman told by his granddaughter Kelly.

My grandfather, Ernest Grand was born in 1947 in Garnish, NL to Charles & Bella Grandy. He was ll yrs old when he started fishing with his father. He fished for 50 yrs. He gave up fishing when he was 61 yrs old because of health reasons.

He grew up in a three-storey house that belonged to his grandparents. One side of the attic was used for a bedroom and the other side was used to store vegetables & do net repairs. My grandfather had seven brothers and sisters. The house had only three bedrooms, the house had a kitchen, parlor, bathroom & pantry. When he was sixteen he moved to a new home where they had running water.

Fishing ran in my grandfather’s family the kids were forced to fish to help support the family, while still going to school. All the family was involved with the sea. Whether it was on boats or the fish plant when my grandfather started fishing, he fished for lobster, salmon, & cod in a rowboat & was salted and sold for salt bulk once a year. A can of lobster was sold for $ 0.17 cents. At 15 yrs old, my grandfather went on a dragger called the Cape Ballard, owned by the Bonavista Cold Storage, they fished for cod, flounder & red fish. On the 2nd trip the boat caught fire in the engine room and all the crew got off in dories. Then some of the crew went back aboard and put tarps over her side and two men tried contacting the Penny Luck for help. They then contacted the Fortune Star, who came and towed the boat & took the men safety to port.

After this, my grandfather wouked in the Grand Bank fishplant on the trimming line for 10 mths, At 16, he quit & went to work with JB Foote G & Sons on the Ambrose Foote which ran flour from South Sidney & all round NL. What was left was taken off port in Bay Bulls & carried to St. John’s, in the fall of the year they delivered two trip worth of coal to Sidney, Grand Bank & Garnish. The Boat was tied up in January, and my grandfather then went out on a dragger in February they fished for cod, yellow tails & red fish. This was the year that the Blue Mist went down, & the dragger went to search for any survivors they picked up some wreckage from the Blue Mist.

After a year, my grandfather then fished off the Grand Banks on an FPI dragger, he fished on Altantic Marie in Marystown. After that, he went inshore fishing with his brother they fished out of a motor dory. The gear they used was for lobster pots, trawls, gill nets & jiggers they delivered their catch to Grand Bank. They then fished in a 21 ft flat, with a 35hp motor which cost $700.00  in the late 70’s & early 80’s a hydraulic hauler was used to make fishing easier. In 1982, my grandmother Millie joined my grandfather fishing, in 1989 they got their fist fiberglass boat which was 22 ft long & had 2 35 horsepower motors, at this time they sold lobster for $1.00 a pd. During the off-season, my grandfather would try to get on a dragger, after that my great-grandfather gave my grandfather his boat to go fishing as his own. He fished on his own boat until 2008, while fishing, my grandfather & the other men would wear many layers of clothes to keep warm. Today they wear rubber gloves but yrs ago they wore wool mitts, on cold nights he wore as many as 7 jackets to keep warm a old gentlemen used to pass my grandfather hot milk through a porthole so that he could try & keep warm. For many yrs, the income wasn’t great there was no extra money and the family was just meeting the basic needs of everyday life. Some yrs the catch was good but the prices were low, & other yrs the catch was low. Going out fishing meant my grandfather had to be away from his wife & children for long periods of time, especially went he went out on the draggers. When he fished inshore, there was not much time for anything, he had to get up at 4am & work until 7or 8pm during the weekends & summers he would take the kids to the cabin on the shore where they would go trouting, berry picking & bring in the wood and play. Two of his children followed in his footsteps & took to the seas. Even today my family keeps up the fishing tradition. My brother now fished with our family, keeping the tradition alive in our family, fishing wasn't a job to Ernest it was his life. He enjoyed time spent at his cabin with his family and friends. He loved to go on his skidoo, anything to do with the outdoors he loved. Whatever he done from fishing to going to the cabin he always wanted his grandchildren and children involved. His family was his everything.

"He may be gone from this world but our memories will be here forever. "

Due to Covid regulations a private family service will take place at Salvation Army Citadel, Garnish on Thursday, February 3, 2022 at 2PM.

Donations in his memory may be made to the Salvation Army Cemetery Fund, Garnish.

To plant a beautiful memorial tree in memory of Ernest Grandy, please visit our Tree Store

Look inside to read what others have shared
Family and friends are coming together online to create a special keepsake. Every memory left on the online obituary will be automatically included in this book.
View Tribute Book
Services for Ernest Grandy
There are no events scheduled. You can still show your support by planting a tree in memory of Ernest Grandy.
Plant a tree in memory of Ernest

Share Your Memory of
Ernest
Upload Your Memory View All Memories
Be the first to upload a memory!
Share A Memory
Plant a Tree