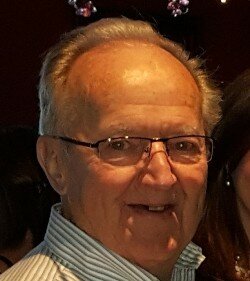 Please share a memory of Ralph to include in a keepsake book for family and friends.
View Tribute Book

It is with great sadness that the family of Ralph George Pike announces his passing on Thursday, December 30, 2021 at the Burin Peninsula Health Care Centre at the age of 78.

Ralph had many careers. Hewas a teacher, a principal of a two teacher school house in Rock Harbour, a banker with the Bank of Nova Scotia before he became an insurance agent with Johnson’s and an award winning insurance agent with Sovereign General before owning his own insurance brokerage.  Most importantly of all however he was loving husband and a father who worked extremely hard providing for his family. He always had time for chats with family and friends and a good game of cards. When he had a massive heart attack at the age of 43, which forced him into an early retirement, he faced many challenges but his strength and desire to continue with his family kept him with us. He was a fighter to the very end until he decided it was time to go. He will be greatly missed by all who knew him.

Specials thanks to his home care workers Lisa, Andrea and Denise who were very much part of our family.

In keeping with Ralph’s wishes cremation has taken place.

In lieu of flowers donations in his memory can be made to the family at rppike@gmail.com and cards can be mailed to PO Box 21, Lewin’s Cove, NL A0E2G0

Unfortunately due to a recent ourbreak of covid 19 the family has decided to not have visitation and the service will be announced at a later date.

“We listen. We learn. We walk with you.”

To plant a beautiful memorial tree in memory of Ralph Pike, please visit our Tree Store

Look inside to read what others have shared
Family and friends are coming together online to create a special keepsake. Every memory left on the online obituary will be automatically included in this book.
View Tribute Book
Services for Ralph Pike
There are no events scheduled. You can still show your support by planting a tree in memory of Ralph Pike.
Plant a tree in memory of Ralph

Share Your Memory of
Ralph
Upload Your Memory View All Memories
Be the first to upload a memory!
Share A Memory
Plant a Tree