Sign in
Recommend Alister's obituary to your friends
Plant A Tree 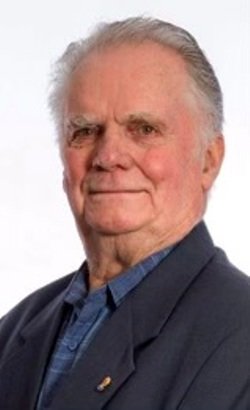 Please share a memory of Alister to include in a keepsake book for family and friends.
View Tribute Book
It is with great sadness the family of Alister Forsey Buffett of Grand Bank announce his passing at Blue Crest Interfaith Home, Grand Bank on June 7th, 2021 at the age of 82 years. Leaving to mourn with many loving memories wife Elsie of 60 years; sons Colin (Kimberley) of Grand Bank and Terry (Rhonda) of Sims Settlement, NS; grandchildren Crystal Vey (John), Kelli Buffett, Davey Buffett and Charlie Buffet; sisters Bea Stoodley (Allan) and Peggy Bradbury (Dave); brothers William Buffett (Lillian) plus a large circle of other family and friends. Predeceased by parents Wilfred and Elouise Buffett, parents-in-law Jerry and Louise Matthews; brothers Tom, George and Bruce. In keeping with Alister’s wishes cremation has taken place. Family will be accepting visitors at Serenity Funeral Home, Grand Bank on Thursday, June 10th from 9-11AM, 2-4PM and 7-9PM. Interment to follow at a later date. Alister was born and lived in his entire life in Grand Bank. He raised his family there and worked alongside his brothers at the family business up until the early 90’s. At that time he and his wife Elsie, started their own business venture until their retirement in 2004. Family and friends were very important to Alister but one of his life’s passions was his 60 plus years with the Grand Bank Lion’s Club. He dedicated much of his spare time with the Lions which gave him great satisfaction in knowing that he played a role in the great work that the Lions organization has done in the community of Grand Bank. With this in mind and in lieu of flowers donations in his memory may be made to the Grand Bank Lion’s Club, Box 247, Grand Bank, A0E 1W0. Today I want to pay a tribute to Alister (Al) Buffett, a citizen of Grand Bank who has left a legacy that spans decades. Al, who passed away on Monday at the age of 82, swam across Grand Bank harbour in April of 1958 to rescue nine-year-old Lloyd Williams from drowning - Al was later presented with Scouting's Highest Award for Bravery by then Gov. Gen. George Vanier. Al went on to become one of Grand Bank's best soccer players, helping to lead the GeeBees to six Burin Peninsula championships and two provincial titles as well as being presented with the Provincial MVP Award in 1960. He spent his entire working life at his family's business and then running his own business along with his wife. He was also a devoted community volunteer which included more than sixty years as the longest-serving member of the Grand Bank Lions Club. Al leaves to mourn his wife, Elsie, two sons - Terry and Colin and their families - as well as two sisters and one brother; plus many other relatives and friends. I consider Al, who in addition to being my brother-in-law, as being one of my best friends - we started and finished school together. "Rest in peace old buddy - you are going to be missed by so many". Wrote by: Allan Stoodley Funeral arrangements entrusted to Serenity Funeral Home, Grand Bank. We listen. We learn. We walk with you.
To plant a beautiful memorial tree in memory of Alister Buffett, please visit our Tree Store
Thursday
10
June

Look inside to read what others have shared
Family and friends are coming together online to create a special keepsake. Every memory left on the online obituary will be automatically included in this book.
View Tribute Book
Share A Memory
Plant a Tree