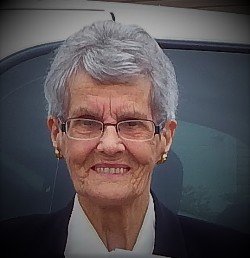 Please share a memory of Gertrude to include in a keepsake book for family and friends.
View Tribute Book

Passed peacefully away at the Blue Crest Nursing Home, Grand Bank, on September 13, 2019, Nora Gertrude (Gertie) Holloway at the age of 90 years.

Leaving to mourn with fond and loving memories son Boyd Holloway (Judy) of Spanish Room; daughter Belinda Walsh (Edward), also of Spanish Room; 5 grandchildren; 7 great-grandchildren, two sisters: Doris Greening of Glovertown, and Charlotte Williams of Lethbridge;  plus a large circle of other family and friends, especially her spiritual family in the Marystown Congregation of Jehovah`s Witnesses.

In keeping with Gertie`s wishes, cremation has taken place.

Gertie was born in Bloomfield, Bonavista Bay, the youngest of 12 children of Capt. Jesse Peddle and Isabella (Humby) Peddle. Following her schooling she began working at a local grocery store, traveling the 6 km round trip by bicycle.

In August, 1947, Gertie married Clayton Holloway of Bloomfield. The following year they welcomed their only son, Boyd. Their daughter Belinda was born in 1953.

Gertie was known and respected in the community as an industrious wife and mother. In 1954, Clayton and Gertie became active Jehovah`s Witnesses. They set a strong example of faith and dedication in raising their two children, both of whom became full-time evengelizers in their late teens. The family was well known in Bloomfield and neighboring communities for their regular participation in house-to-house visitation work on weekends. Since Clayton worked away a lot as a lumberjack, Gertie worked hard to keep the home fires burning and provide guidance and discipline for the children. They rarely missed regular meetings three times a week at the Kingdom Hall in Musgravetown, 6 km from their home in Bloomfield.

In 1965 Gertie moved to St. John`s, along with Clayton and their children, since Clayton had found full-time employment there. In 1969 she moved out of her `comfort zone` to re-locate to Marystown to assist Clayton in establishing the first congregation of Jehovah`s Witnesses on the Burin Peninsula. Together they continued their regular participation in preaching the good news of God`s Kingdom well into their eighties, making many lasting friendships among the people of the Marystown-Burin area.

Gertie loved gardening, and together she and Clayton created a beautiful parklike setting around their home in Spanish Room. Late in life Gertie discovered a hobby that became her passion: birdwatching. Clayton constructed innovative birdhouses around their property which protected the smaller birds from squirrels and crows, and Gertie delighted in watching and identifying the varieties of birds which were attracted to their well-stocked birdhouses, especially the one which was visible from their sun room. She found special delight in a family of bluejays which took up residence in the birdhouse on the front lawn.

At the age of 85, Gertie`s health began to decline due to severe osteoporosis and arthritis. After Clayton passed away in 2016 at the age of 90, she moved in with her daughter Belinda. Later, due to deteriorating health, she became a resident of the Marystown Retirement Center, where, despite her limitations, she became well known for her keen mind and sense of humor. Though confined to bed, she tied in by telephone to participate in worship at the local Kingdom Hall, and she still loved to watch the beautiful sunsets through her bedroom window.

About 6 weeks ago, Gertie suffered a serious fall which resulted in a period of hospitalization. After just two weeks at the Blue Crest Nursing Home, she passed peacefully away on the morning of September 13, one month short of her 91st birthday.

A memorial service for Gertie will be held at the Kingdom Hall of Jehovah`s Witnesses in Marystown, On Saturday, September 28, 2019 at 2PM with a private family inurnment at a later date.

Look inside to read what others have shared
Family and friends are coming together online to create a special keepsake. Every memory left on the online obituary will be automatically included in this book.
View Tribute Book

Share Your Memory of
Gertrude
Upload Your Memory View All Memories
Be the first to upload a memory!
Share A Memory
Plant a Tree