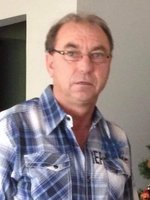 It is with great sadness that the family of Eugene Foote of Burin Bay Arm announce his passing at Burin Peninsula Health Care Center June 26, 2021 at the age of 63 years. Leaving to mourn with fond and loving memories his wife and best friend Sheila; beloved son Craig (Melissa) of Burin; grandchildren Mackenzie Foote, Aidan Foote, Skylar Thomas and Alexis Coombs; siblings Ann Brown (Norman), Dave Foote, Corey Critch Charmine Foote, Jackie Williams and Roland Foote; brothers and sisters-in-law Guy Hackett (Hannah), Eric Hackett (Eileen), Alice Simpson (Wall) and Ada Poole; special caregiver Violet Farrell and godchild Janice Hackett; many nieces and nephews plus a large circle of other family and friends. Predeceased by father Wallace Foote; baby son Mark Foote;brother-in-law Bill Hackett; sisters-in-law Joan Mckinnin and Elizabeth Hackett and parents-in-law Winnifred and Clayton Hackett. In keeping with Covid rules there will be a walk through visitation on Tuesday from2-4PM and 7-9PM and Wednesday from 2-4PM and 7-9PM. Funeral Mass will take place from St. Patrick's RC Church on July 1st at 2PM with cremation to follow. Anyone wishing to view funeral mass there will be a link below replacing video and you will be able to start viewing at 1:45PM. In lieu of flowers donations in his memory may be made to the family. Eugene was married to his best friend and companion for 44 years, Sheila who he loved and cherished dearly. They done everything together and he took care of her to his last breath, she was his world. He was a great father and best friend to his son Craig who he loved dearly and was so happy to have him home living close by. They played darts together and spent many hours together, they won the provincial dart title together and he was so proud of that accomplishment. Craig was a Toronto Maple Leaf fan and Eugene was a diehard Montreal Canadian fan so that obviously caused a lot of fun for them both. They got to go to a game in Montreal together and it was a gift from Sheila to them both. Eugene purchased personalized Montreal jerseys for both his grandkids not caring about the cost. He loved his grandchildren and loved spending time with them and they loved him as well. He started working at Marystown fish plant and worked there until it closed and then went on to be an industrial scaffolder. Eugene enjoyed doing wood working and trouting in his spare time. He was a friend to many had great sense of humor and loved to laugh. He wasn't a man to complain or talk about his own sickness but would do anything to help anyone else. He was a member of Burin Fire Department for 17 years, he joined on his birthday on February 21, 1989 and his dedication started right away he had his first call and didn’t even make it home for his birthday celebration. He served as fire chief from 2005-2006 when he had to resign from his duties because of work commitments in Alberta, it was a very sad day for Eugene the day he turned in his uniform. The tribute the fire department in Burin gave him last night shows how much he was respected and loved by many you can view the video in the memorial video link below. The family will never forget the kindness and thoughtfulness of this final tribute to him. Also the family wants to thank nurses Tracey and Tamara and Dr. Le for their kindness and care of Eugene in his final hours. It will never be forgotten. Eugene maybe gone from this world but he leaves behind a legacy of family and countless good deeds that will always be remembered by all. Funeral arrangements entrusted to Serenity Funeral Home, Burin. "We listen. We learn. We walk with you." Vigil will take place on Wednesday, June 30th at 8:15.